VRUK at the Forest of Dean Half Marathon, 1 April

HomeNews FeedUncategorisedVRUK at the Forest of Dean Half Marathon, 1 April

April 3, 2012 0 0
Report from Jenny McNamara at the picturesque Forest of Dean event: 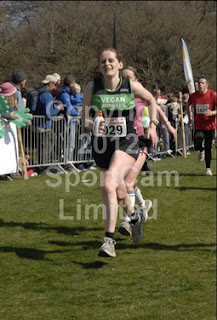 Getting to the race was really easy with tons of parking yards away form the start line. There was a lovely atmosphere and people were really friendly. I saw fellow vegan runner, Karen Morgan and her friend Lois at the start line, and another lady vegan runner (not in VR kit) said hello to us- hope to see her again at another event! It was chilly to start (2 degrees), but soon hotted up (it was 14 degrees when we finished!). The course was challenging and I was very glad to have put in some hill training as well as distance runs, as apart from a couple of downhill stretches, there were some killer hills that had many cursing and walking! I got a ‘Good running, vegan!’ comment from a marshal at one hill, possibly because I chivvied on another runner who briefly stopped to walk and encouraged him to run to the top (probably against his wishes!). There was one road crossing where we had been warned you might have to stop for traffic, but thankfully I got through without having to stop. The forest section of the run was lovely, though there was little shade from the sun on the wide tracks. The surfaces varied, but most was on trails with loose gravel or forest tracks. There were regular water stops, though I don’t think I’ll ever master drinking from a plastic cup…
It was nice to have encouragement from husband Stu and our 3 hounds at the 10 mile point (he says he is inspired to put his running shoes back on and is hopeful his knee will stand up to it). The finish was a welcome sight (see attached pic) and I managed to burn off two runners at the finish to get a PB of 1.56.45. I am thrilled with this time as my last half marathon (previous PB of 1.58) was a flat road race in 2008! Living in Cheddar and a vegan diet are obviously doing my running the world of good!
I am really grateful to Karen and Lois for their company on a couple of training runs- I very nearly didn’t do the half at all thinking I hadn’t done enough training, so that was just what I neede.