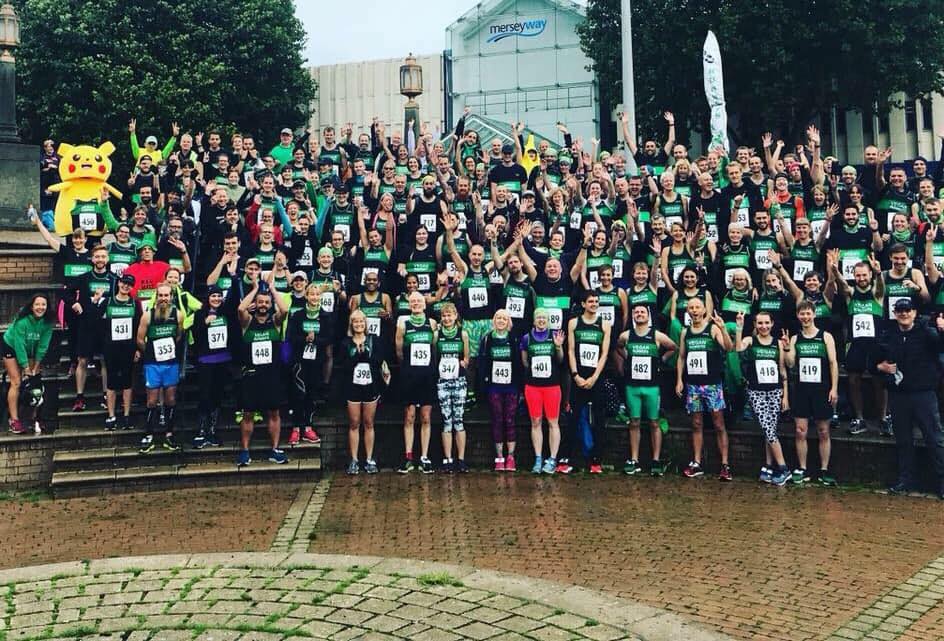 On Sunday 16th September 2018 a sea of black and green descended on Stockport for the Big Stockport10K race.  Runners from all over the North West and beyond attended with runners even coming from as far afield as Scotland and the South Coast.

The race was adopted three years ago as an annual event where members from all over the UK could meet up with those they share a common bond and celebrate all the values that bring us together.  From the first year with 80 runners, then 160 runners last year, this year 229 runners signed up for the event.  In all the footage of this fantastic event, the Vegan Runners are everywhere. This amazing presence really helps to highlight the vegan community and keeping the rights of animals and health benefits in the forefront of people’s minds.

As always, the community spirit that is indicative of the Vegan Runners was in huge supply. We had meet ups arranged prior to the race with old friends plus the forming of new ones and the overall support which is a huge feature of the club was in abundance during the race.  Everywhere you looked, before, during and after the race we had a huge presence and there were some fantastic costumes worn by the Vegan Runners especially abananas (Kevin Dempsey & Colleen Minto), a pepper (Mike Harper) and the large pikachu worn by Mark Love

The Vegan Runners continued to dominate at the podium with Jo Armitage in a time of 41:43 getting gold in the women’s open category and the 1st Male went to Alex Hinchcliffe for the second time, coming in with an incredible 34.oo mins. Alex managed to take 30 seconds off his 2017 win, despite a modified route this year, which he loved.  Vegan Runners also has 2nd male, as well as 1st male and female teams.

After the race, various eating venues across Stockport and into Manchester got the Vegan Runners experience with fun extending into the early evening.  Huge shout out to Jonna & Tom McFadden, for coordinating the fantastic takeover and everyone else who helped.

Judging by all the social media posts it was a great day for everyone and let’s aim for even bigger in 2019 with a likely date of 15thSeptember, so keep it free and see you there. #TeamVegan

(Write up by Hélène Pettitt)