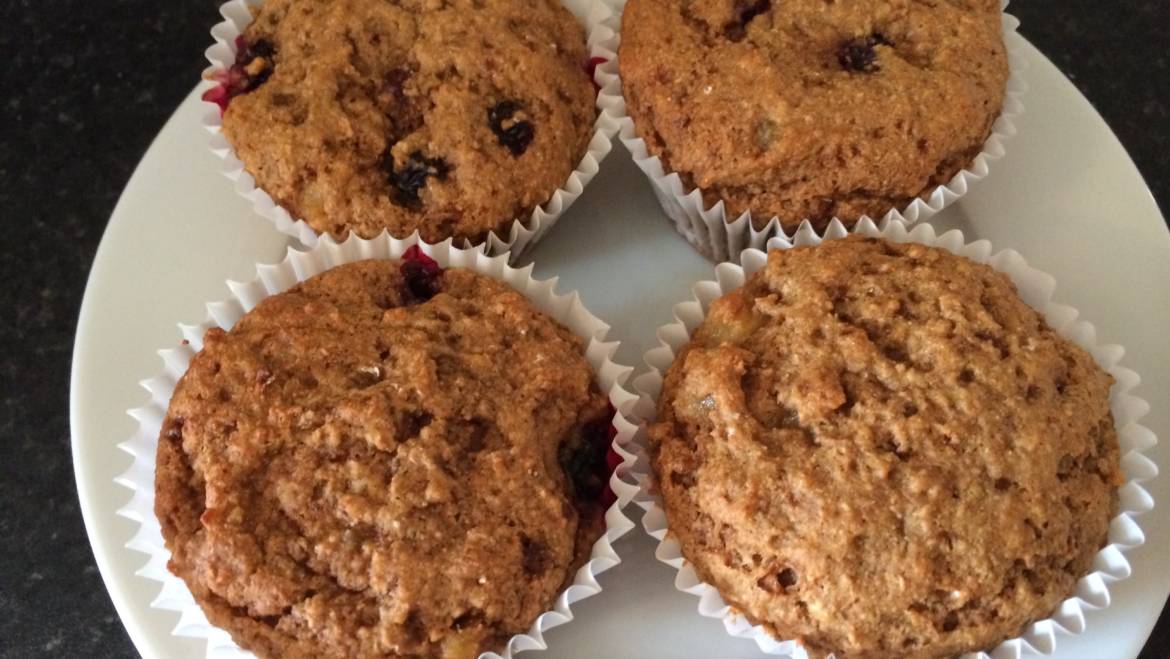 My quest to use up all these blackcurrants has led to me finding yet another Dreena Burton recipe that I could substitute the blackcurrants for the blueberries.

Apparently “Lassy” is an affectionate term for molasses in Newfoundland, where Dreena grew up. Now, personally I’m not a big fan of molasses, but I know it is good for me & I didn’t want to waste any of the blackcurrants so I gave it a try. I don’t usually use the sugar in Dreena’s recipes when maple syrup is also used. However, I decided to use it this time as I know that blackcurrants can be a little tart! Molasses is a good source of calcium, iron and magnesium and ginger is believed to be a good natural anti-inflammatory. Some people also believe ginger can reduce exercise induced muscle soreness. I’d also recommend using an ice-cream scoop to put the batter into the muffin cases as it makes it easier to get them all the same size.

So, I think these muffins are a great, tasty treat for a runner which also has some healthy beneficial ingredients. We tried some of them with the berry jam on which was delicious. They are great for a breakfast treat with a plant based milk hot chocolate or just as a tasty snack after a run. I gave these muffins to five different people, only two of whom were vegan, but everyone loved them. I hope you do too.

Preheat oven to 350°F. Line a muffin pan with cupcake liners. In a large bowl, combine the flour, coconut sugar, cinnamon, allspice, sea salt, and ginger. Sift in the baking powder and baking soda. Stir through until well combined. In a medium bowl, combine the molasses with the applesauce. Then whisk or stir in the milk, maple syrup, and vanilla extract, and mix together. Gently fold the wet mixture into the dry mixture and mix until just combined (do not overmix), then fold in the berries. Spoon the mixture into the cupcake liners (this will fill 10–12 cupcake liners nicely full). Bake for 22–24 minutes (smaller muffins need less time, and also berries may affect baking time; see note), until a toothpick inserted in the centre comes out clean.

Blueberry Note: These have been tested with frozen small and large blueberries. With large blueberries, the muffins take longer to cook through, as the batter around them takes longer to set. So, you may need another minute or two. With small (wild) blueberries, they set quicker, in around 22–23 minutes (or a little longer if you’re making just 9 large muffins).

Thanks to Dreena Burton for permission to use her recipe.
http://plantpoweredkitchen.com/