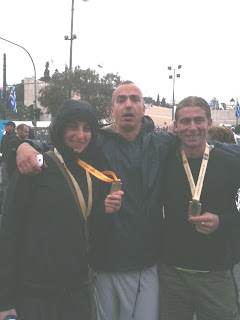 After having just under 3 months to train for this race it came about quickly. I arrived in on the 10th November & spent the best part of the 11th & 12th at the Filozoikos Neas Filadelphias dog shelter in visiting friends and lending a hand with the dogs.

As I am sure some of you will be aware, myself, Christos & Victoria were all running this race not only as Vegan Runners but to help raise money and awareness for Greek Animal Rescue, a UK charity I am heavily involved with which works to alleviate the suffering of the strays living on Greek streets.

The day before the race all the talk was about the weather and how it was going to be a cool 10oC, raining and windy. A normal day at home in the then, I thought….

The night before the race I went to bed nice and early but due to the rock hardness of my hotel bed I found sleep impossible. I then commenced to wind myself up so much at the lack of sleep that I managed 2 hours tops that night! All the time I laid awake I could hear the wind building up nicely outside.

On race morning we arrived at the start point at around 7.30am. True to form it was a really miserable day. Strong winds, rain etc, coupled with the fact you had to hand your kit bag in around an hour before the start of the race to ensure collection at the end. I opted for wearing a running top with my vest over the top & a baseball cap as it really was cold and horrible. I also was given two clear plastic sacks to put over myself. With one I fashioned a head & arm holes and wore it as a top, the other I made into a makeshift skirt. Classy!!!

The race couldn’t start quick enough.9am finally came round and I was part of the second wave of runners to leave after the elites. There had been much talk before the race about how tough it was due to the nature of it being uphill from 6-19miles. There were varying opinions of how long this would add to my time from initially 20-25minutes to chatting to people on the day who had run before it saying 15 minutes.  My plan was to play it by ear but try and conserve a little energy for after the hills (the last 7miles).

The marathon itself follows the original route from Marathon to .

At around 9 miles despite the appalling weather I was very quickly reminded of why I was there when two stray dogs  ran into my path. They hadn’t suffered so far in their lives thankfully unlike many of the dogs we help and were both very happy and playful. They pounced on each other as they ran and obviously picked me out as a dog lover when they sidled up to me. We ran together for just over a mile and they really lifted my spirits. I reached the half way point in 1.35 and although my legs felt good I wondered if I had gone off too fast? So for the first time ever I used my head & tucked in behind two guys who were running at roughly my pace. I ran with them for around 4 miles but on looking at my watch I realised I could possibly go sub 3.10 so I kicked for the next pack of runners. At around 18.75 miles I hit the last hill which left a few runners crippled and pulled up on the sidelines. I kept thinking back to my hill training and reminding myself of why I had been putting myself through it!

So with just over 6 miles to go I knew I had to just keep pushing. Looking at my Garmin data I now know that I managed to average around 6 minute 42 second miles for the last 7 miles which I am very pleased with as it’s a dream of mine to crack the sub 3 hour mark next year and I know this is what I have to do in the latter stages.

The marathon finishes in the Panathenian stadium with lots of people willing you on to the line. But I was already shattered by that point.

I completed the marathon in 3 hours 7 minutes and 57 seconds beating my PB by just over 3 minutes. On this course I feel like this is a really good time. I was exhausted but a very happy man.

I have been informed that Christos, Victoria and I will have raised just over £3000 at the final count so we are all ecstatic.