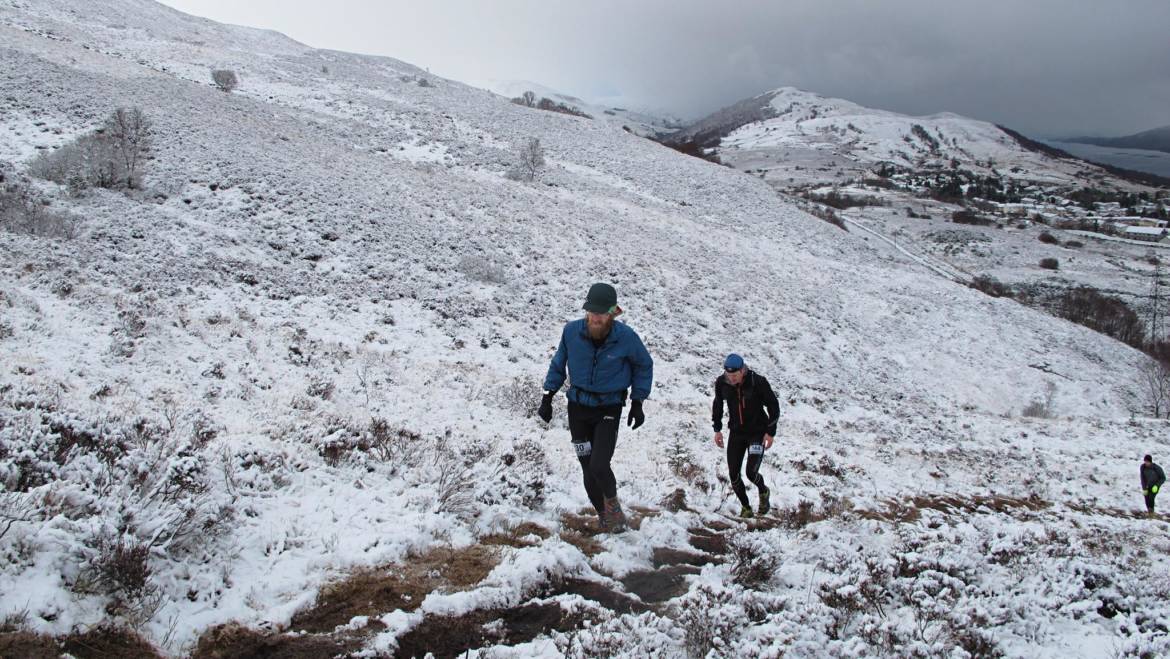 Last weekend must have been one of the busiest to date for Vegan Runners UK members. Great turnouts for the Brighton Half and the Hugin 6 hour.

Craig Wallace reports on the Runduro where it wasn’t really vest weather:

‘Done the Runduro, at Fort William on Saturday. Its a multi-stage race, so you’re only timed for some parts of it. A nice route, on paths and forest tracks, up and over Cow Hill and a little bit up the Ben Nevis path.

Most of the timed stages seemed to be up or down steep hills, but at least you have the chance to relax/recover in between. A fair bit of snow on the ground, so quite slippy in places. And rather cold, a couple of snow showers. But great views from the top when the sun came out. A total of 20km with 750m elevation, about 11km was timed.

Craig Wallace at the Runduro Matt Toy joined 5,000 odd runners at the National XC Championship’s at Parliament Hill – don’t know which is slippiest, that mud or Craig’s snow 🙂

Jo Brown ran the Guildhall 10k while encouraging a veggie runner to take that last step towards veganism:

‘Ok no PB today due to needing to walk a little to recover from a stitch (but that’s another story!), new trainers dried out in time so wore them and they seem fine. It still feels a bit odd wearing the custom fitted footbeds, which probably shows how badly my old trainers fitted! I heard someone mention Vegan Runners when I walked into the Guildhall and at the start a chap said his girlfriend is vegan and struggles with what to eat, so we might get a new Winchester runner. Then I had a chap running behind me who has been vegetarian for 30 years, but can’t give up cheese, so we had a chat about nutritional yeast, as you do, so hopefully I’ve helped two people a bit today. Then at the end I had a new runner asking about my diet, so all in all I may have been a minute slower this week (seriously I should look at the course profile, not just if it’s close enough mileage wise!) but it’s never just been about PBs for me so it’s been a good morning.’

Member Claire Abbey was in Espoo, Finland competing in the Endurance 24 hour indoor track race where she finished with 145.09km, 12th lady and 47th of 109 overall – well done Claire!