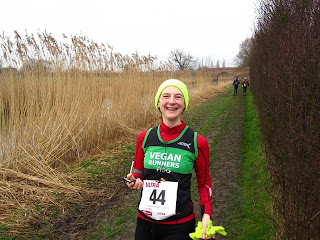 Ed: Maria Hamilton reports after stepping up to ultra distance in pursuit of double marathon + fitness.

As part of my training for Comrades I’d signed up to one day of this two-day ultra where people run along the canal from Cotgrave to Grantham and then back the second day. Flat, cool, damp, offroad, just over a marathon in length, what better training could there be for a 55 mile uphill road race in South Africa?! You can do one day or the other or both. Luckily I’d resisted the impulse to do both, on the grounds that it’s nice to spend some of the weekend not wearing running kit! I came to be very glad I’d been sensible…

Was dropped off at the start at Cotgrave by my long-suffering other half (the sleepy and bewildered dogs being rather uncertain as why they were being driven across county and then back! They had a super time that day though, doodling up and down the canal looking for duck poo to eat). I soon spotted Anna (recovered from some niggles earlier this year, I’m happy to say) and other running friends old and new.
During the pre-race briefing I became aware that breakfast (2 very large milky coffees made with the soya milk I always pack) was keen to make an exit – but I didn’t dare pop back into the leisure centre for a wee, as I was sure I’d get lost and never make it to the canal if I started late!
So once we had made it to the canal I hied me off to suitable cover and communed with nature. Once I emerged from the undergrowth there was no-one around and clearly I was dead last! However I knew which direction we were headed and fortunately I managed to catch up with the next person – a Welshman sporting rather fabulous socks – well, not catch, but sight – just before the detour that took us off the canal due to the roadworks that are currently decorating that part of the Midlands. Otherwise I am not sure I’d have not got lost. The route is marked by stickers but they are quite discreet!
Though the advice mentioned trail shoes, compass and map case, in fact the first ten miles were on hoggin towpath. But then the towpath turned into mud and grass, the sort which to the unpracticed eye looks level but the unfortunate foot reports as anything but!
And around this time the run began to take shape, that shape being… pear.
I don’t remember if I mentioned this, but the main downer of the Malta trip was a sudden and brutal calf cramp that kicked in late on Saturday night when I was reading in bed. (My poor other half was woken by his slumbers by a convulsing woman who had fallen on top of him and was uttering incoherent cries of distress! He really does not deserve any of this). Well, despite a massage session this week, it turns out that the afflicted calf was still not as loose as it should be…
… and the achilles on that leg was now starting to play up. Oh…. great.
Hey ho, I thought, what do we do here. If it hadn’t been my first ultra (or, I suspect, if I’d had sight of the medal, which was more my-first-10k than my-first-ultra, I know, very very shallow!!) I might have pulled out. Instead, I texted my OH and then my friends to say I’d be finishing later..
– as you can see in the above picture where my other half caught up with me near a checkpoint. I look remarkably chirpy considering my achilles was all hurty and I’d shut my finger in a gate (why do I do these offroad things, why?!).
The run/walk changed to walk/run and I tagged along with the two chaps you can see in the background, who were training for the MdS like so many of the runners there that day. One had done Comrades and had many wise words for me, including how to pronounce the term Vasbyt (roughly translated, “fastbite”, or “dig deep and hang on in there”). This quality was something I had to summon up later as a look at my Garmin told me I had to get a shift on if I wanted to salvage some tiny bit of pride and finish in under 6 hours. The leg was experiencing what even a doctor would call pain (as we all know, normal “pain” is what doctors call “discomfort” :D). I was very much looking forward to the packet of frozen peas that I’d dispatched my OH to go and buy! But at least the towpath was back to hoggin and fairly even.
I’m not really sure where the finish line was but when I got to the Ramada they said I could stop running and gave me a medal, so I guessed I was done. Everyone’s muddy shoes were lined up outside the foyer japanese-style, with one exception – the young chap I saw wearing shoes inside had run the race barefoot! Only 22… go him eh? No sign of Anna (well she had come in more than an hour earlier!) but one of my other pals had come in 2nd lady and was v. chuffed.
Will be taking a few days off now to spend quality time with frozen peas and the iron thumbs of my super sports massage lady – Cotswolds marathon in 2 weeks….
Anyway I can recommend the Kings Hotel (ex-BestWestern) in Grantham if anyone is travelling with pets. They were very welcoming & put us on the ground floor, and did not turn a hair as we tottered in at 11pm with two extremely large dogs.
Oh and I’ve just checked the results and Anna did do Day 2 (3rd lady :D) so it seems her niggles are a thing of the past – happy days 🙂