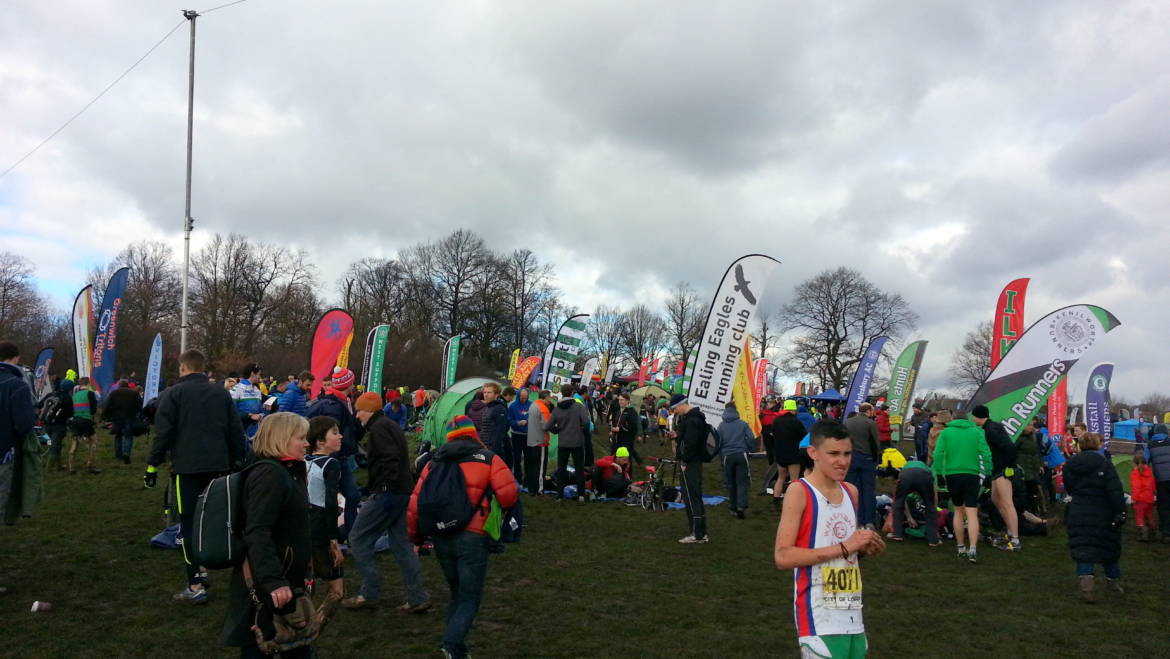 A few weeks ago I ran a personal best and a personal worst, all in one, very muddy, race.  It was the 2015 National Cross Country (XC) Championships, at Parliament Hill in north London.  I took part in the Senior Men’s category, which was two laps around the hill for a total of roughly 12 kms of running. This was my first ever XC race in the UK (thus the personal best) and it would be fair to say I was totally unprepared for the scale and difficulty of the event (thus my personal worst over 10k!).

Let’s break it down…

The social aspect – the XC champs are more than just a chance to run around a muddy field, it is an amazingly social event with runners, club tents and families everywhere. Clubs have their colours and banners up everywhere, giving it more of a festival feel than a race.  Sadly I was the only Vegan Runner running this year, so I wasn’t able to jump into things socially.  I did meet up with the super-speedy vegan Matt Woodman (thanks for all the photos Matt!) which picked me up a lot.  Next year I shall endeavour to rally more of the club!

The scale – I’ve been to big city marathons where 20,000 people run and it takes 10 minutes to get across the start line.  I’m used to the city scale of things.  However this was different from these pristine and manicured events.  XC races don’t have wave starts, instead runners within their category simply line up across a 100 metre wide starting area and everyone just belts off in a giant muddy scrummage when the gun goes off.  The Senior Men’s race had in excess of 2,000 starters.  2,000 people in club colours, bantering and jostling into position and ready to go as a single great charge.  It is awe inspiring see the wave of runners burst out at high speed, straight up the hill in an effort avoid being bottlenecked when the course narrows.  I wasn’t prepared for this start and was subsequently left battling to get around and overtake people throughout the race. Schoolboy error!

The conditions – I’d heard that XC races can get muddy, so I really should have expected this one.  I’ve done plenty of ultras and training runs that involve muddy trails, so I thought I’d bring my trail shoes.  Big mistake.  It isn’t that it was muddy (it was) rather it was the fact the mud was churned from many thousand runners and had the consistency of treacle.  My big, wide and comfy Altras were not suited to the conditions at all. Don’t get me wrong, I love those shoes, but I would have honestly been better off wearing road shoes as any grip in the tread was buried under clingy mud.  Lesson learned!  On the bright side, those with XC spikes seemed to be enjoying themselves running (playing) in the mud.

Not so speedy, but suitably muddy, finish (Photo: Matt Woodman)

The competition – I’m not a super fast runner, but I’m no slouch either. In most mass participation races I like to come in the top 5% and I figured this would put me in pretty good stead for the race.  It did not.  With all my other mistakes piled up and lack of any race specific training, meant I finished much closer to the back of the pack.  I can take some comfort in that everyone is a club runner and thus fairly keen, but it doesn’t absolve me of totally underestimating the event and the quality of the runners.  It does however give me a lot of room to improve and come back next year stronger. Hill and speed training beckons.

All said, I’m amazed that XC has remained such a niche event. The quality of the runners is stunning, it is open to all ages, it is very exciting to watch and running it is great (if somewhat humbling) experience.  By all rights it should be so much more popular, but it has somehow stayed under the radar all this time.  Probably for the best though as I can’t imagine many more people fitting onto the course.

Although the next nationals are back up in northern England, I now have the XC bug and I’ll definitely be taking part in a lot more events in the future!